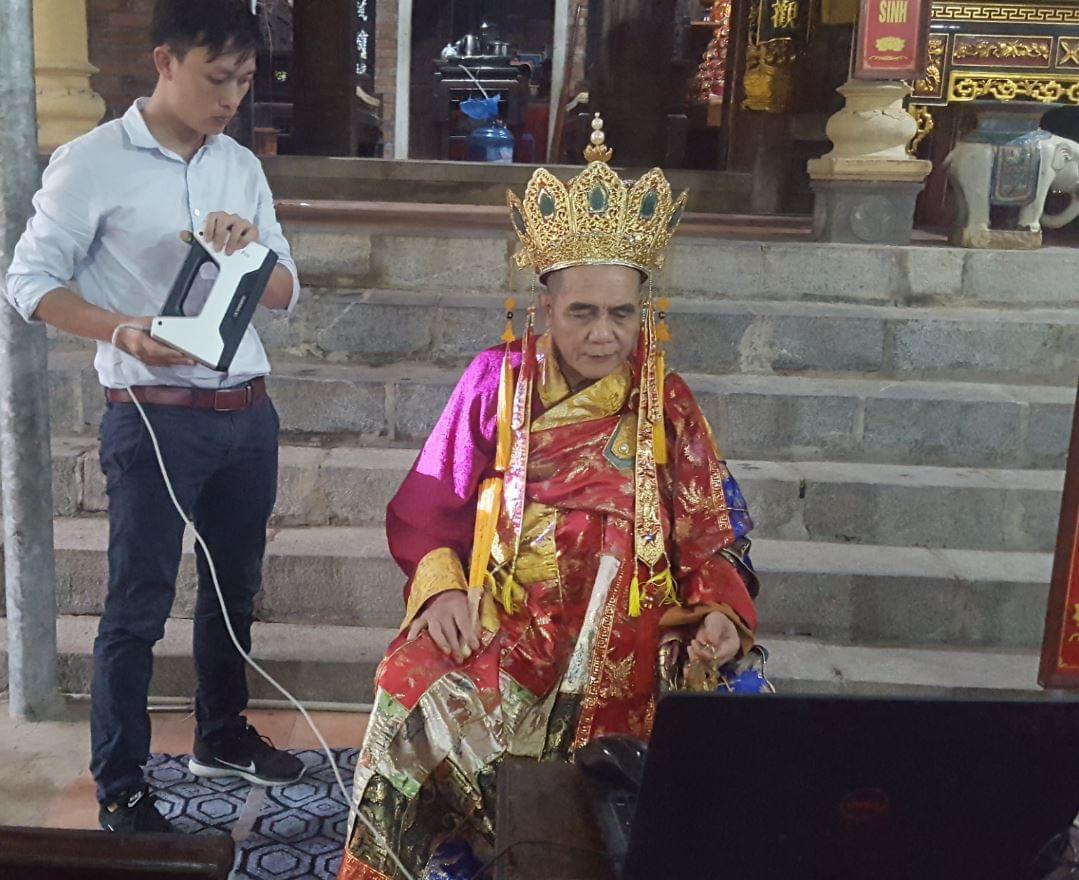 Quynh Lam Pagoda is located on the hill of  Dong Trieu Bridge , in  Trang An Commune, Dong Trieu Town  ,  Quang Ninh Province ,  about 3.5 km from  Dong Trieu Ward and   83 km from Ha Long City . It is recognized by the Ministry of Culture and Information as a historical and artistic monument.

The pagoda is located in the center of Thuong, Ha, Sinh. The front of the temple is a large lake, the other three are covered hills. This land is known as the throne, or the "Dragon adornment".

According to the researchers, through the bibliography, including the temple pillar, Quynh Lam pagoda was built under the reign of King  Ly Than Tong  (1127-1138). One of  the great  pioneers in the construction of the pagoda was  Nguyen Minh Khong (1076-1141). [2] [3]  In the 11th and 14th centuries, the late Le and the 17th-18th centuries, Quynh Lam was the  largest Buddhist center  in  Vietnam .

At Ly, monk  Ming not  have to cast a statue of  Maitreya  by  co-  high six staff (about 20 m), once considered one of the  Four Great Treasures of Annam [4] [5]  and a stone stele high 2.5 m, 1.5 m wide with smooth curved dragons. But Quynh Lam Pagoda actually became an important Buddhist center in the 14th century with the activity of  French Loa Dong Kien Cuong, the second founder of  Truc Lam Zen .

On the basis of the old Quynh Lam Pagoda, in December 1317, Phap Loa built and built the Quynh Lam Institute with massive and complete architecture. With the great support of the king and nobles, Phap Loa has built and opened many temples. In 1314, he built 33 bases for worshiping the Buddha. In this period, based on the old Quynh Lam Pagoda, in 1316 Phap Loa founded the  Quynh Lam  -  the first Buddhist university. First in our country . In the last years of the 13th and early 14th centuries, together with  Hoa Yen Pagoda in Yen Tu,  Bao An Pagoda  in Super Type (Bac Ninh),  Thanh Mai Pagoda In Hai Duong, Quynh Lam monastery chaired by Phap Loa is one of the Truc Lam churches in the Tran dynasty. In 1329, Quynh Lam became the  first fairy tale of South Vietnam . This is the center of teaching the teachings and training of monks for Buddhism. Many famous festivals are held here as the "Seven Days, Seven Nights" (1325). At the same time, it can accommodate up to three thousand people at a time. Back to Bich Dong to meditate. A proverbial Tran Dynasty Tran of 20 acres of rice fields. Commander Vuong Hue Tran Quang Trieu and Princess Thuong Tran worship 900 taels of gold to cast Di-Lac. The temple owns more than thousand acres of farmland and thousands of people.

In 1319,  Phap Loa  called for priests and priests to raise more than 5,000 copies of the Tibetan Buddhist monks in Quynh Lam. Phap Loa has also carved many sets of laws at  Vinh Nghiem Pagoda  to serve the evangelization, circulation of teachings. Later, the policy of "necropolis" of  the Ming Dynasty  caused the wooden blocks to be destroyed in the early 15th century. The sutras in Vinh Nghiem pagoda are more fortunate to this day. In 1328, he again cast a statue of Maitreya. Then he asked the king to pull the statue from the electric stand to gilded  gold . In 1329, Phap Loa brought along a piece of  ashes  of  Tran Nhan Tong , the first of the Truc Lam sect in the stone tower in Quynh Lam.

Stone tower at the temple grounds

In 1727, the pagoda was erected by Tich Quang. This tower is the tomb of the monk  Chan Nguyen , a monk with great merits for the temple. The tower consists of seven floors, 10 m high, the top of which is a multi-storey tower, on the tower with a stele recording the history of Professor Chan Nguyen. In the Nguyen Dynasty, the sixth year of Thieu Tri (1845), the pagoda was   burned down by the Chinese burners and the front porch. All the wood is fire, King Tran Nhan Tong is intact. Through the ups and downs of history, the ancient architecture of Quynh Lam Pagoda has been destroyed a lot. [6]

According to a preliminary report of the excavation and archaeological study of the temple of Quynh Lam Pagoda in 2009, the  Institute of Archeology  - Vietnam  Academy of Social Sciences , Dong Trieu People's Committee and the Institute of Archeology has conducted a project to investigate and excavate archeological relics of Quynh Lam Pagoda phase I and in 2008, continue to carry out excavation projects, archaeological studies temple monuments Quynh Lam phase II. 2009 excavation, archaeological study phase III. After three excavations, the foundations of the Le Trung Hung period were clearly visible  and some Nguyen architecture. Found the foundations of 09 architectural works and 06 courtyards, which are interconnected to form a complex of many types of architecture. Interiors of Qiantang, Middle Tang, Hậu Đường are corridors and six rectangular courtyards, built of  green stone , located on opposite sides, balanced vertically and horizontally, creating a harmonious space. Air for works. [7]

According to the survey results, archaeologists have recorded 29 foundations of towers dating from the eighteenth century to the early twentieth century. The earliest dating tower is the Tue Dang Tower of Chan Nguyen Zen Master  , which is also the most intact tower in the tower garden. Particularly, the survey in 2009 also found some components of the stone tower of the Tran Dynasty by the French teacher Loa built to contain the  relics  of Tran Quoc  Tran Tran Nhan Tong . However, the search for information related to the important stupas was set up in Quynh Lam just stopped to see the tower structure, no trace of the foundations tower.

In addition to investigations, archaeological excavation Quynh Lam Pagoda from 2007 to now shows the scale of the architectural complex of the ancient Quynh Lam pagoda is now preserved in the ancient relics it is stele high stone. 2,5m in front of the pagoda is decorated with soft winding dragon, typical of the Ly dynasty. Next is the green dragon, nearly one hundred stone column foot, touch lotus, dragon head of terracotta, stone. Especially a corner of the pedestal with birds  Garuda Created as a squat, two hands reaching up two pedestals to support the lotus. All of them express the Tran stone sculpture. In the Le dynasty, the remains are the stonework and the stupas, especially the two stone carvings in the tabernacle and statue of the late Bui Thi Thao with elaborate carvings. , the soft is in the dynamic very natural, realistic. In addition, the pagoda has a stone inscription on the date of the restoration of the pagoda, the names of good men and women have benefited the merits of money remediation of pagodas and works done during the restoration. In the pagoda's garden, the ancient tower system is grafted with smooth blue stone and the technique of mortar bricks has left the posture a valuable art treasure.

The festival of Quynh Lam pagoda takes place from the 1st to the 4th day of the second lunar month, but the spring arrives at the pagoda during the three months of spring, with the devotion of all Buddhist followers. , Buddhist ceremony.